Another race where the result did not represent the speed the Ligier #13 LMP3 of the Inter Europol Competition showed in the free practice sessions. The main problem in this race was probably a power train issue but that still needs to be checked out by the team.

James Dayson started in the race, and when he handed the car over to Guilherme Oliveira he was in 8th place. After a  20-minutes red flag period (the G-Drive Racing car had caught fire) and with a lap down, Oliveira started his stint. He moved from 33rd to 13th overall and to 7th in LMP3. With 49 minutes to go, Nico Pino got in the car. He did a good job but could not move up in the LMP3 ranks. The gap was too big. The #13 finished 7th.

James Dayson: “I was pretty happy with the start. It was tight at the beginning and lost two places. I had two race incidents and a spin in my stint, but I could refocus and be actually doing good on pace. But then the issue with power loss started. That was frustrating as we all had the pace to be fighting for a podium today. It wasn’t meant to be. Luck wasn’t on our side.”

Guilherme Oliveira: “My stint started well and I felt very comfortable in the car. I was catching up until also I was having the same problems as James. In the rest of my stint, I tried to minimize the damage. We will try again tomorrow.”

Nico Pino: “I got into the car and kept the tires from Guilherme. The car felt good in balance but still had the problem. But I also saw that we had the same pace as the class leader, which made me happy. Now we have to put everything together and hope no more issues will show tomorrow in the last race and luck will be, for once, on our side.” 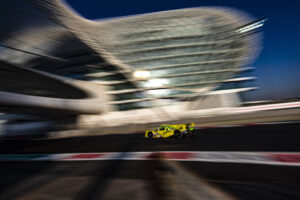