A perfect LMP3 Spa success, as the LMP2 comes from the back to join podium celebrations!

The Spa-Francorchamps European Le Mans Series round today saw the #13 trio of Charles Crews, Nico Pino and Guilherme Oliveira return to the top step of the podium for the third time in as many races, following a flawless performance in the penultima round of the championship. The victory moves them to the head of the LMP3 standings heading to Portimao next month.

There were also long-overdue celebrations on the right-hand side of the Inter Europol Competition garage as well, after what had seemed to be a tough weekend was completely transformed on race day. After a difficult season, Fabio Scherer, David Heinemeier Hansson and Pietro Fittipaldi were able to race from the very last position on the 39-car grid, to second position.

The team spent the week at Spa-Francorchamps, taking part in the test day on Wednesday before progressing through the official practice sessions and then into a dry qualifying session where Charles put the #13 LMP3 third on the grid, Noam Abramczyk 13th in the #14, while it all went wrong for Fabio in the LMP2.

Pushing hard with rain expected, but yet to fall, Fabio lost the #43 Oreca at the Bruxelles tight right-hander. With the car stranded at 90 degrees to the traffic, the red flags were thrown and the session halted, This meant that Fabio and teammates David and Pietro would head into the race from last on the grid as a penalty for the session stoppage.

The race was more straightforward for the #13 trio, with Charles running at the front early on, before dropping back when it was clear that title rivals #17 COOL racing had been unceremoniously punted out of the race. Still very much in contention, Nico took over, moved back to the front and in tandem with a great fuel – and long stop strategy – was able to run at the front and subsequently, take a comfortable win with Guilherme at the wheel.

Fabio meanwhile enjoyed an astonishing triple stint at the start to move from last to the race lead. It was an incredible performance from driver and team alike as the #43 Oreca was flying. A great battle with the #37 COOL Racing entry followed before he handed over to David. Despite a quick spin at La Source, he too was right on it, lapping at the leader’s pace in the second position for a long period of the race. This became fifth and then Pietro took over and at this point, the team did not know what to expect..

Pietro’s task was made more difficult, as he was down a set of tyres compared to his rivals – courtesy of the qualifying spin – and had to run four stints with the same tyres on the lesser-loaded right-hand side of the car. Expectations were that he would lose pace, and while the lap times did drop marginally, great strategy and great skill vaulted him second, a position he would retain to the chequered flag.

The #14 crew had a tougher race in the sister Ligier LMP3, but the pace was there for Mateusz as he took the class lead during his stint, but unfortunately, over the race distance, he and teammates James and Noam had to be content with the eighth position.

The team now prepare for the final rounds of both the European Le Mans Series in Portugal, as well as the FIA World Endurance Bahrain season finale.

Charles Crews #13
“Our whole outlook for the race weekend was to continue what we have been doing whilst being as aggressive as we can without risking anything at all. All three of us were very careful with the conditions and with the pace to ensure we got from start to finish without scratching the car, which we did. The pitstops were perfect and the strategy was absolutely unreal. Each of our long stops were under FCY which was perfect and being the only Bronze driver in the car, this gave us additional flexibility, especially to stretch the fuel to very maximum.”

Nico Pino #13
“Traffic was actually good and it was fun passing others to move back to the head of the field in P1 to ensure we had a margin and had everything in control. It was a case of continuing the great work that we have been doing and to push when required while not taking any real risks.”

Guilherme Oliveira #13
“It was crucial to make no mistakes, to keep the car on the track and knowing our margin was quite big it was so enjoyable as the car was mega today. Every lap around here is magic, so I really enjoyed the race and I’m looking forward to my home race.”

Pietro Fittipaldi #43
“It was an absolutely unbelievable race from P39 to P2 and nobody thought that was possible, to be honest. Fabio had a fantastic start in the damp and was able to move all the way forward and then David got in the car and was right on the pace. At that point, though we were doubting the result was there for the taking as we were down a set of tyres compared to our rivals due to Fabio’s qualifying spin. So I was thinking that the others would have new tyres at the end and I would be struggling for pace. I got in the car P5 and I don’t know how – but we were able to do some good lap times and undercut the other to get back to P2. Towards the end, I was fighting and holding off the Prema and the right-hand side tyres were the quadruple-stinted ones, but we were able to execute and get second place, which is unbelievable. So happy with that.”

David Heinemeier Hansson #43
“I have never – in a single race – gone from that bad to that good in my entire driving career. We have never started with such low expectations from that low on the grid to finish in second position. It was an absolutely incredible run from Fabio at the start and it was finally a time where I felt we got more than the sum of our parts. Everything was there, it was clicking, it was easy and the lap times were just there. To see Pietro finishing in P2 was incredible. It’s been a tough season so it’s great to feel post-race joy and this is a huge boost.”

Fabio Scherer #43
“That was alright! I can’t wait to see the onboard footage of my stints. It was crazy in the beginning with some damp areas, with some cares even going off on their formation laps but for me I love these conditions, and I went with the pack, used our momentum and was able to pass a lot of cars to move from P39 to P1 with a lot of good, hard battles through the field.”

Mateusz Kaprzyk #14
“My stint was very good, and I was racing so hard! It’s never easy to pass the other guys, especially when offline it was a little wet but still, I can be very happy with my performance to take the #14 to the front of the field in my stint.” 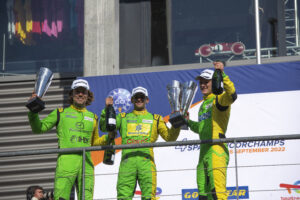